Believe it or not. The latest trend in my hometown — Taiping — this time is not drinking some greenish healthy grass juice, or making some healthy home-made enzyme, or touching the tortoise or hugging the pineapple anymore.

The new trend in town is touching the wild boars!

Yes, you never heard me wrongly, wild boars as in pigs from the forest or babi hutan. 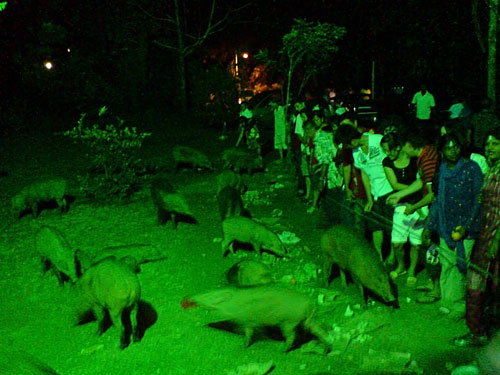 Every evening around 7 to 8 PM, people from everywhere will start gathering at this small Hindu Temple behind Tesco to wait for the wild boars to come out.

When I say people from everywhere, that includes the locals, tourists from outstation such as KL and Singapore who came all the way busses after busses just to see and touch the wild boars.

When it’s almost time, the Hindu Temple will ring the bell, and the wild boars will start coming out from the forest. I saw around 20 to 30 wild boars that night. According to my brother, during peak season the number will double to almost 80 wild boars! Can you imagine that. 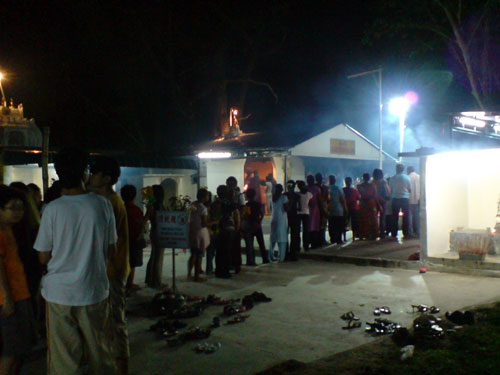 Sister: “Yer… so smelly one…”
Dad: “Ceh… cannot say like that at this place. Later the Indian Temple people heard liao and they come and whack you…”
Mom: “Wah… really smelly leh…”
Dad: “I just told you all not to mention it.”
Me: “Hahaha…”

The wild boars are just like cats, they walk here and there in front of everyone not showing a single sign of fear towards the people.

Sister: “Eh! They come near us liao!”
Me: *touch touch*
Me: “Yer… why the wild boar so oily one…?”
Mom: “Of course lah, they never shower one mar. You think what, after finish eating they go home take a shower and sleep then tomorrow come back again ar?”
Me: -_-”’

I took a video but it was too dark, cannot see anything. I am not sure how true the legend is, but one thing for sure, the Hindu Temple must be making lots of money.