I have officially published 67 posts and you are reading the 68th.

While reading the first post dated exactly 1 year ago titled The return of me had brought back a lot of memories. It’s been a long way.

My initial plan for commemorating this anniversary was to revamp the blog with my own new blog design. It’s a shame for a web designer to use other people’s design for one year.

I had almost 1 month to do this but I never start until the last week. Hahaha… I guess I’ll never change. If you were to put me back to the past where I have enough time to redo my Final Year Project during my college time, I bet the result is going to be the same.

It took me 4 days to come up with this design. 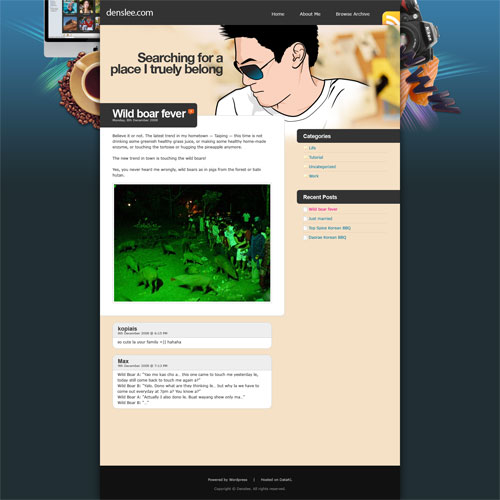 I worked for whole Friday night until 3 in the morning for that vector portrait of myself. It turned out to be less satisfied.

I kind of like the overall layout except the design of the header and the background.

With a less satisfied design and limited time to convert the design into WordPress theme, at the end I gave up designing and watch Sex and the City instead.

Yes Kevin, I will buy you Jogoya as promised.

But it doesn’t mean the end of the story. I will continue to work on this design and hopefully I can finish it before 2009.

The toughest client of all is no body else but myself. I want the blog to reflect who I am, what I do and what I like. But deisgning it is harder than I thought it would be.

So if you have any ideas, comments or critics, do let me know.