After waiting for almost a month since the day I register. After joining the pre-marathon at Bukit Jalil, the big day has finally came.

It was the Standard Charted KL Marathon 2009.

The day before the event (Saturday), Sophea and I went to Dataran Merdeka to collect our race pack.

The race pack comes with a Reebok singlet (good quality 1), the bib number with sensor on it and some sponsor’s vouchers. 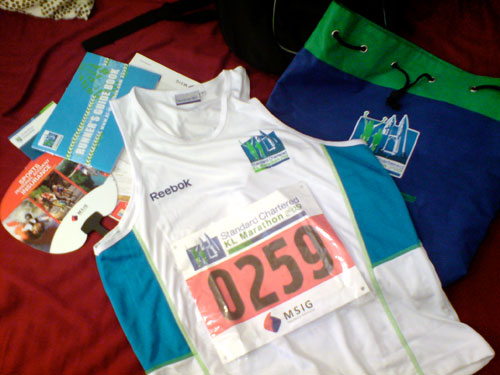 0259 is my number and red colour is for 10km. Faster go buy this number, after you won just remember to give me half.

After the race pack collection, we went to Mid Valley for shopping, dinner and watched the movie Fighting.

Reached home around 11 PM. Tried to sleep earlier but it was just too early. I thought I fall asleep around 1 AM.

The next day, we woke up at 4 o’clock in the morning. Got ourself prepared, had our breakfast and then head off to Bukit Jalil to the take the shuttle bus. 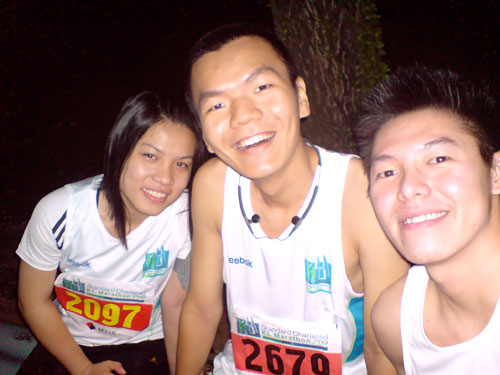 We reached Dataran Merdeka around 6.30 AM. By the time we reached there, the full- and the half-marathon runners have already started. 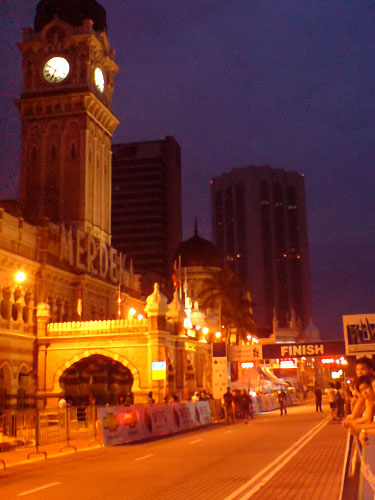 We started with some warm-ups before the run (and of course pose a bit). 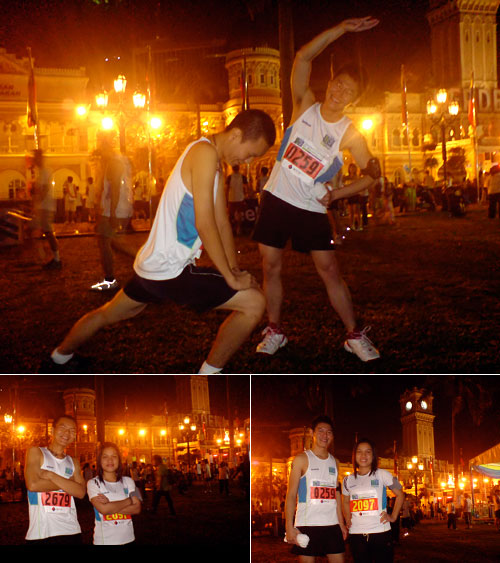 10 minutes before the race, everyone started to gather at the start line. 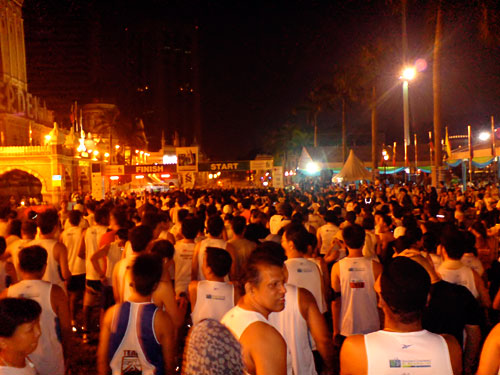 We were very excited and nervous.

Once the clock reaches 7 AM, the race started with a gun shot.

All of us got separated very early in the race.

I started the race with a slow pace. The hardest thing at the beginning of the race is to avoid stepping on people’s foot and overtaking the others.

Everything was fine until the first drinks station, 3km from the starting point not far away from the National Museum. I had a drink and continued running. But too bad it followed by a sloop.

Running on sloops has never been part of my training before this. And most of my trainings never go pass 4km. I had to slow down but still maintained at a running speed.

But then again, it was another sloop after the second drinks station at 5.5km. I was kind of exhausted at that point. I had to walk. 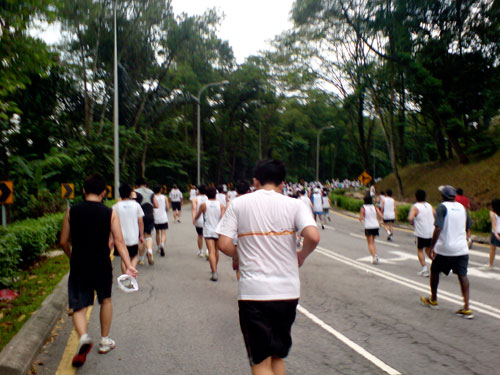 After the sloop, I started to run again. This time I didn’t stop all the way until I reached National Bank.

From a distance, I saw the big Malaysia flag high in the sky, I thought “Yes! Almost there!”.

I sped up a bit and try to reach the finish line sooner. But as I got nearer to the Dataran Merdeka, I almost pengsan because instead of turning right to the finish line, we had to turn left to Sogo to run another freaking 2km.

The last kilometre was nightmare. I was tired, exhausted, drained, expelled and all other conditions used to describe depletion of physical and mental resources.

I didn’t think of anything else but to ask myself keep running and hopefully I can reach the finish line before the time limit.

I kept running until I saw the big Malaysia flag once again. I wanted to speed up again but my body just couldn’t do that.

As I slowly ran towards the finish line, I wondered if I have made it in time. To my surprise, it was 1 hour 20 mins and 20 seconds! 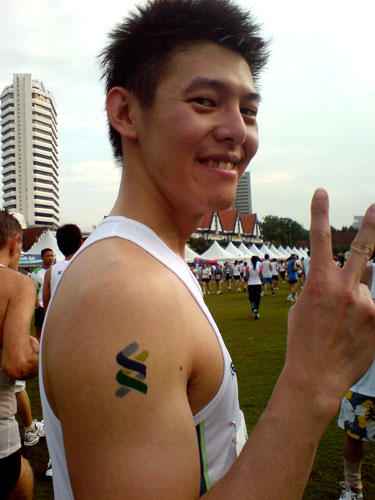 It was such a relief. I felt great and satisfied.

Ted was already there long before me. 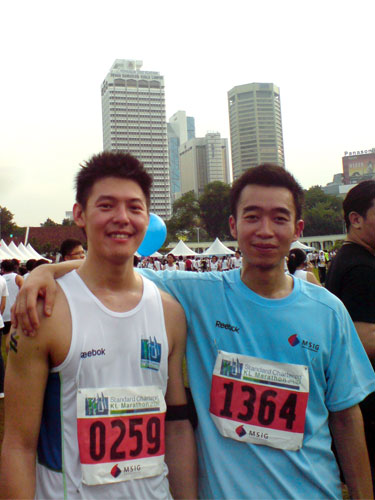 Sophea reached the finish line approximately 4 minutes after me. 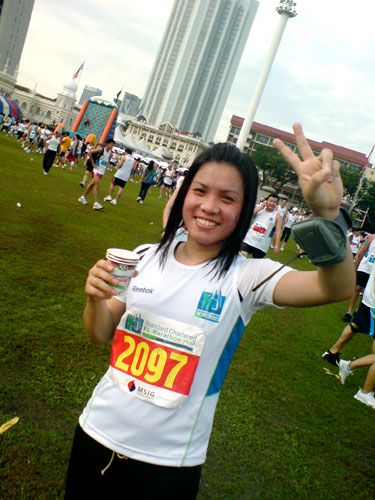 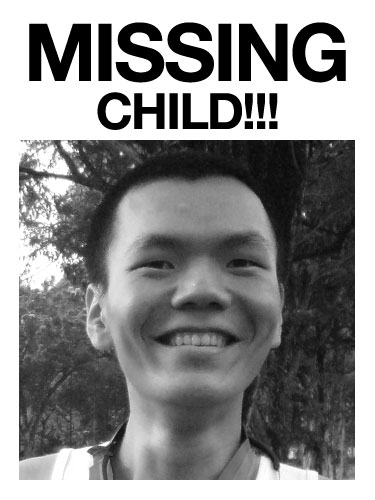 We couldn’t find him and he didn’t bring his handphone.

We have no choice but to leave him behind and thought that he is old enough to make his own way home.

So we headed to the bus stop to take a bus back to Bukit Jalil. And out of a sudden, Jenn Ting appeared from no where.

“Why you never bring your handphone?” Sophea was pissed.

“Because I know… faith… will lead me to find you all once again…” Jenn Ting replied.

However, there we were, at the finish line holding our finisher medals and with a big smile on our faces. 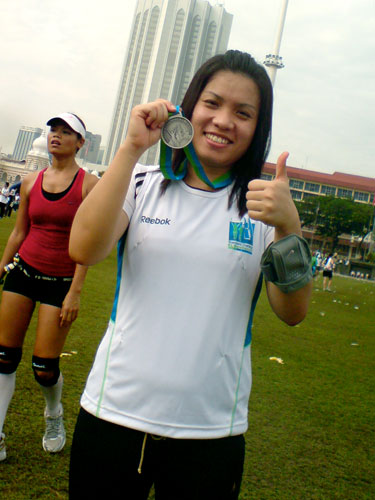 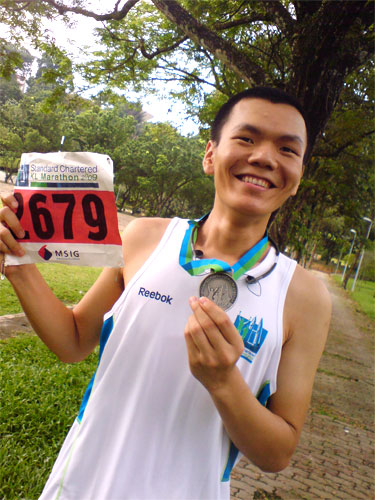 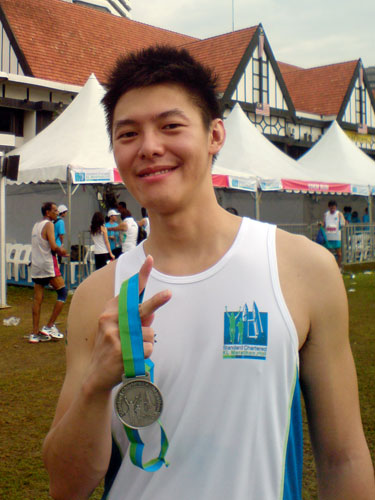 It was really a good run and wished I was more fit and well trained. 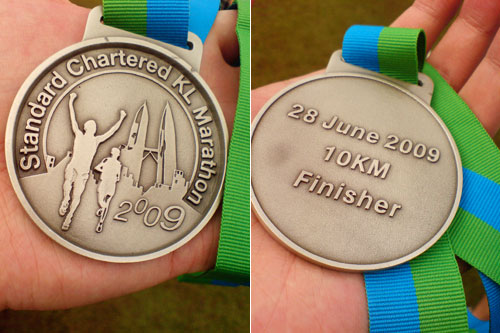 If I have the chance to run again, I will. But next time, I will have to train harder.