No luck with car

Believe it or not, early of the year during Chinese New Year, I overheard from the radio that those who are pigs in Chinese horoscope (that’s me) will not have much luck with cars during the year 2009.

I wasn’t superstitious type of person. But until recently, I think I really don’t have much luck with my car. 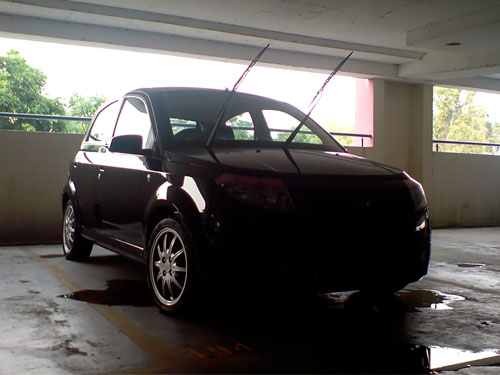 Here’s how it all started.

Early last month, I sent my car to the service centre for minor servicing and changed the timing belt. When everything done, RM787 flew away.

Okay never mind, because I was already expecting it.

Few days later, my car broke down at the company. I couldn’t get it started when I was suppose to send Kevin to the airport. At the end, he had to take a taxi instead.

Okay never mind, I left my car there and I drove Kevin’s car for a few days.

When Kevin came back, I sent my car to the service centre again. It seemed like the speed sensor was malfunction. Sensor changed, RM188 flew away.

But that’s not all, I was then told that I need to change my tyres because they were already worn due to the imbalance lower arms (a metal that holds the tyre to the car body).

Okay never mind, I was aware of the lower arm problem for almost a year or two.

So I thought if I didn’t change the lower arms, there was no point to change new tyres. Both front lower arms and tyres changed, RM834 flew away.

Everything seemed to be fine until a week later, the lower arms started to make some funny noise especially when I’m on bumpy roads.

I was busy over the week so I planned to send the car to the workshop again during weekend.

But even before I can do that, my car’s battery went dead. I had to cancel my plan for that night and stay at home.

Okay never mind, the battery is going to die sooner or later.

The next day, I jump-started my car by borrowing electric from Kevin’s car and drove to a nearby workshop to change the battery. Battery changed, RM155 flew away.

Finally, it came Saturday. I got to drive my car to the previous workshop to fix the funny noise problem. Problem fixed (this time F.O.C.), I drove my car back happily.

The next day, the funny noise came back, AGAIN! I had to drive my car back to the workshop AGAIN, show my frustrated face to the supervisor AGAIN, waited for an hour AGAIN and listen to him telling me that everything is fixed, AGAIN!!!

This time, I test-drive the car and the sound was really gone. It was such a relief.

Just when I thought I’ve gone through everything, bad luck seems to be knocking my door again.

Just now when I finished my music class, I had trouble starting my car AGAIN!!!