I celebrated my 27th birthday with a bunch of friends at Hard Rock Cafe, Kuala Lumpur. 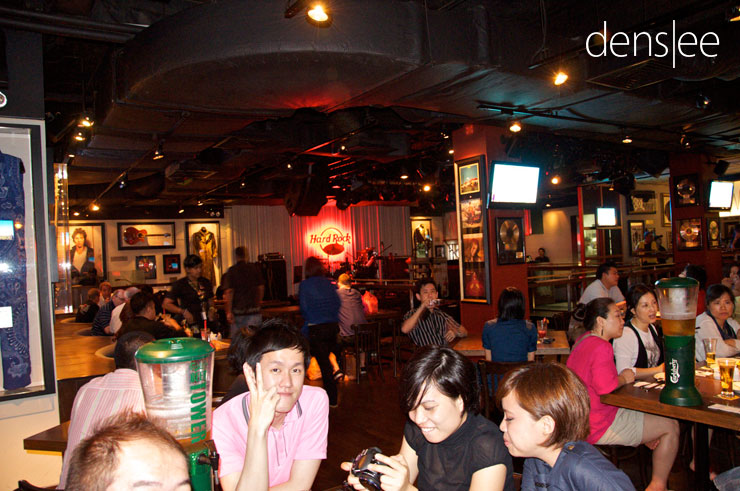 The food was great, and not forgetting to mention that their service was awesome. The waiters and waitress were very attentive, patient and always having a smile on their faces.

First appetiser, the Hard Rock Cafe Nachos (RM33). It was simply the best, I think it’s much more nicer than nachos from Chili’s.

Gotta love the cheesy nachos dipped with the sour sauce. But better finish the nachos before the cheese gets cold and turns hard.

The second appetiser, the Jumbo Combo (RM48). It’s a platter of fried stuffs with some sauce. Nothing so spectacular other than the spicy chicken wings.

I heard the potato skins were good (hidden behind the spring rolls) but eventually it tasted just like, potato skins.

Next, the signature 10 oz beef burger (RM42). What’s so special about this burger is, not only it is big, but also they let you choose how you would like your burger to be done.

It’s a very big burger, I think it’s enough to be shared among 3 persons, if you order other food as well.

On the slightly more healthy side, we had the Chicken Caeser Salad (RM25). Big portion as well and tasted just nice.

Didn’t try out how the Hawaii Chicken (RM30) tasted like. But I’m sure it tastes just like chicken.

The Twisted Macaroni (RM32) tastes very good. Still, too much for one person to finish it.

Happy hour is from 6PM to 9PM where you can get two alcoholic beverages for the price of one.

There’ll be a live band performance at 11PM, though it only last for around an hour.

Good food, good service and good environment. Definitely a good choice for gatherings if you are willing to pay slightly more.

Be ready to expect a large crowd during weekends and do book in advance if you do not want to be disappointed.